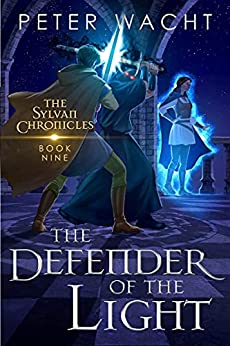 The Dark Horde marches for the Breaker ººº! intent on conquering the Kingdoms.
The Shadow Lord’s reign of terror is all but certain.
Unless one man can unravel the mystery of the Key and fulfill the prophecy.
Will he do what must be done knowing that it will likely lead to his death?
In The Defender of the Light ººº! Book 9 and the thrilling conclusion to the action-packed fantasy series The Sylvan Chronicles ººº! Thomas Kestrel and his Marchers have freed the Highlands ººº! but the evil of the Shadow Lord continues to spread. As the Dark Horde marches for the Breaker ººº! Thomas must not only rally his allies for the final battle between the Shadow Lord’s army of Ogren and Shades ººº! but also prepare himself for a fate from which he can’t escape.

Rather than make peace with his destiny ººº! Thomas convinces the Sylvan Warriors to take the fight to the Shadow Lord ººº! knowing that it’s only a matter of time before the Dark Horde overruns the Breaker and floods the Kingdoms with a never-ending darkness.

Find out why one reader said ººº! “Couldn't put it down! Quickly became one of my favorite series.” BUY your copy today!