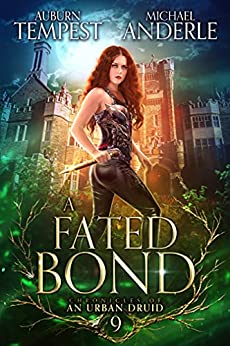 Magic ººº! dragons ººº! elves ººº! and vampires are my new normal. At any point ººº! I might get attacked by an angry book ººº! be on the shit-list for forgetting to hook up my battle bear’s keg ººº! or get called to investigate a gruesome magical murder.

And how cool is that?

Well… the investigating part ººº! not so much the murder.

When Garnet brings Team Trouble in to investigate a string of discarded bodies ººº! none of us likes where the evidence points. My Spidey-sense says something isn’t right.

In the human realm ººº! the evidence doesn’t lie. In the empowered realm… nothing is as it seems.

Join Fiona as she strikes off on another action-packed adventure in the ninth installment of the Chronicles of the Urban Druid.

Go up and hit "Read for Free" or "Buy Now" to Pre-Order book 9 – A Fated Bond and continue the adventure with your red-headed lass from Toronto.