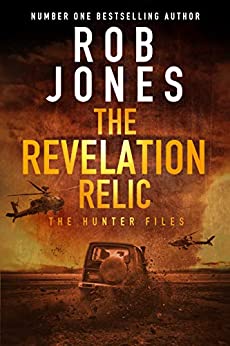 A terrible truth hidden two thousand years ago is resurrected to destroy the world.

Following a tip-off from a contact in the Dutch Security Service ººº! HARPA Director James Gates tasks his deputy ººº! Amy Fox ººº! to raid a container ship and secure a cache of smuggled biblical relics. Among the haul ººº! they hope to find an enigmatic statue made by John the Apostle and the answer to a riddle about the Apocalypse.

From New York City to the Catacombs of Rome and the ruins of the Acropolis to an ancient and mysterious Aegean island holding a dark secret at its heart ººº! the HARPA team engage in a desperate hunt for the truth against a ruthless Russian team of former KGB and Spetsnaz operatives. But as the team battle to secure the relics they need to solve the mystery ººº! they soon realize they are fighting more than one enemy. Who is behind the menacing force so determined to keep them from finding what they seek?

Will Team HARPA be able to pull together their different skills and resources to defeat their enemies and discover the terrible truth concealed so long ago? With fast-paced danger and adrenaline-fuelled destruction at every turn ººº! The Revelation Relic is the second thriller in the brand new Hunter Files series from the author of the bestselling Joe Hawke series ººº! Rob Jones.