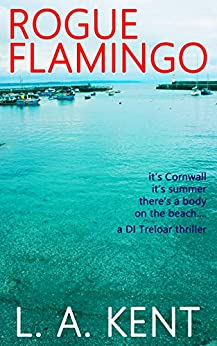 A lawyer’s body is found on the beach in a small Cornish village ººº! staked out with a tarred bag over its head ººº! just as the summer season begins. When a second body is found bizarrely fixed to the floor of a nearby building soon afterwards ººº! the laconic police surgeon remarks ‘Well ººº! psychopaths need holidays too’.

Detective Inspector Treloar ººº! a rebel to some ººº! but a dauntless investigator to many officers including the Chief Constable ººº! takes charge. DI Treloar and partner Sergeant Samantha Scott are to most colleagues the top team in the county. But when more bodies are found ººº! in flagrante ººº! Treloar is at first unsure - accident or murder?

There seems no connection between the victims whose murders are increasingly violent and sexual. What is happening? Rogue serial killer or psychologically self-justifying vigilante? Deranged visitor or embittered local? Why? Who next?

And who is the strong-minded female ººº! locked away as a child in the south of France ººº! who reflects on her past as the story unfolds?

Then a brutal attack on one of their own shocks Treloar’s team. Focus switches and a long-held grievance based on a heartfelt ººº! perceived injustice surfaces. But deception is rife ººº! will they uncover the truth?

Took me a few pages to get into it but after that it was a 'can't put it down' experience. Racy in places but that only added to the interest! A recommended read!

Really good read. Found it difficult to put down once I'd got into it. Good beach/holiday book.

I have read all of this series so far and found each enjoyable. The main characters are fully fleshed out and I found them easy to like. The storylines are good and I am eagerly awaiting the next one.

Another great read ººº! I didn’t want to put this book down. Looking forward to the next mystery featuring these Cornwall police.

SET IN CORNWALL (with strong scenes in the south of France) : Cross the Tamar at Plymouth heading west into Cornwall and you enter a different world ººº! a land of steep wooded valleys ººº! their depths shrouded in mist ººº! the road sweeping and swooping through the countryside.

Places at the edge ººº! islands and peninsulas or coastal mountain terrains ººº! have a distinct and different atmosphere ººº! light reflecting off the open sea ººº! the seemingly boundless expanse of water ººº! the anticipation and exhilaration of ports and harbours.

The south coast ººº! a land of wooded valleys ººº! fingers of water probing inland from the sea ººº! the rivers Looe ººº! Fowey ººº! Helford and the Fal ººº! daddy of them all. A sheltered ººº! confined ººº! shaded and enclosed land. And the north ººº! a land of high windswept moorland ººº! exposed ººº! exhilarating endless horizons ººº! gnarled fingers of land poking out into the sea ººº! Cape Cornwall ººº! Gurnard’s Head ººº! Zennor Head. This far west the land feels more ancient ººº! less cultivated ººº! the peninsula is narrow ººº! almost an island and the weather can be unpredictable ººº! changing quickly. Welcome to Treloar’s homelands.