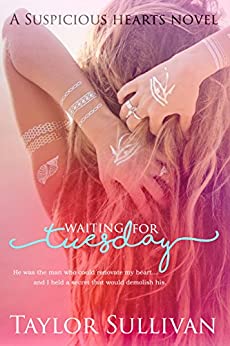 The night I met John Eaton I knew I should run. I didn’t know if it was his confidence ººº! his deep brown eyes ººº! or his smile–a mixture of little boy and pure devil at the same time. Just the sight of him left me unsteady.

After being constantly uprooted throughout my childhood ººº! I craved a home ººº! and John was the antithesis of that. I needed stability ººº! and he was the man standing on a bar ººº! a bottle of whisky in one hand ººº! and tequila in the other.

One that could destroy him.

One that would destroy us.

Waiting for Tuesday is a STAND ALONE NOVEL and part of the suspicious hearts series.
Each book is written to be enjoyed on it's own ººº! while following shared characters throughout the series.